£575 - The standard wedding package includes: With your camera work and our editing skill. Your wedding video will be great

A great You Do The Shoot package supplying you with everything you need to shoot your great DIY wedding video.

Plus 5 completely finished, professionally edited packaged DVD’s and a desktop version so you are able to make additional copy's with chapters such as:

£650 - Our recommend packageGet the best of BOTH worlds for your big day? Why not have a standard package plus a professional wedding videographer.

With this package we aim to give you the best of both worlds. The charm and spontaneity of the DIY wedding video. Using all the great footage you have shot combined with the expertise of a professional videographer.

Who on arriving at your wedding, will supervise and direct your filmers as part of his crew. Giving you three cameras filming your wedding day. Producing a high end look and total coverage With this package, nothing is missed.

We are the only video company in the UK offering this service.

Plus 5 completely finished, professionally edited packaged DVD’s and a desktop version so you are able to make additional copy's with chapters such as: 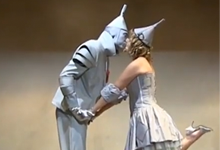 This package allows you to review your wedding footage and decide. Whether to edit the footage yourself, or to upgrade for an additional £250 and have us do the job for you. A great DIY wdding video option. With the preview package, you will be provided with:

With this package you have the option of shooting your wedding video on your own cameras, We will then send you an external hard drive onto which you download your footage. We collect the hard drive and edit your video to the same specifcation as our package videos. A great DIY wedding video option.

5 completely finished, professionally edited packaged DVD’s and a desktop version so you are able to make additional copys, with chapters such as: 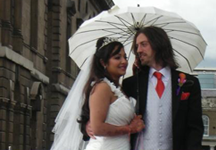 Great tips for the best shoot

How to make your DIY wedding video even more AWESOME

One quick tip .... get the guests to leave a message for the couple, using the flip screen on the camera,  that way they can see themselves while they're filming the  message....nice tip I recon

a video version of a selfie ..a selfie .Great Results guaranteed, and they hold the camera nice and close to their face which is always fun 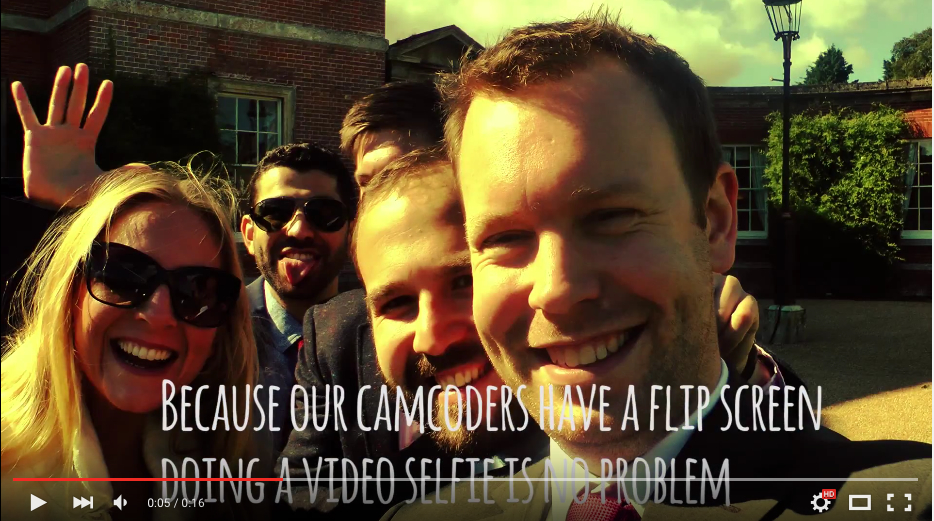 Best bits of advice is whilst filming

1: people are compelled to move the camera around far to much. So try to avoid zooming and try to keep the camcorder still. This one bit of advice will make a huge difference to your footage. For example during the ceremony keep the camcorder fixed on the bride and groom. avoid swinging the camcorder between the couple the vicar and the guests.

3: Multiple angles....It's a simple thing,  when you shoot a static things, say someone getting their make up done. Shoot that same thing from different angles. This adds interest and gives the impression of multiple cameras

Will my friends film the important bits.

Ok so the important bit are theses...The ceremony, confetti throwing and speeches that what you would pay a huge amount for a pro to film

The simple way to avoid any errors when these  parts of  the day are being  filmed is this make sure you have both cameras filming these particular bits.

A good choice for a filmer is someone who id naturally out going and funny. Best not to choose someone who is shy

Tell them to talk to your guests or interact with them. they could ask them to do something funny for instance dance like Micheal Jackson, recite you favorite line from a movie do an impersonation of the groom, whatever the idea is to bring people out of there shells.  Ask them to use their imagination.
Or in other words. Talk to the people you are filming, while you are filming them and have fun.

Good position for the ceremony shoot

If this position is not feasible, then try to get a seat near the front for the ceremony on the aisle side ( see attachment camcorder  position )

4:If someone  wants to leave a message for the couple to the camera while you are filming, or has something specific to say and you the filmer are in a noisy environment, get as close to the person who is speaking as possible. Make sure the camcorder is not zoomed at all and get as close as possible without the footage looking ridiculous.

On the same subject when you film the speeches  make sure you are not to far away from the speakers.

Between 10 and 20 feet if fine. This will assure good clear audio

Questions for the guest

What is your favorite thing about ...insert name

What is your favorite memory...insert name

would you like to leave... insert names... a message it can be anything

Ideally you will shoot the speeches with both Cameras

One camera, the main should remain fixed on the speaker at all time preferably on a tripod

The other camera can be more free and shoot the speaker and also reaction from the audience, especially the bride and groom

Flip the  camcorder screen around and let people do a video selfie......... always guaranteed hilarious results

Remember to use those lights in the evening they make a massive difference and also remember you  can just their brightness like with  a dimmer switch. They don't always have to be on full.... having them set just on 50% will make a big difference to your footage and be less obtrusive to the guests

Although not a disaster, it's best if you don't press the buttons on the camcorder shown in the attachment

Just close the screen and the camcorder goes into sleep mode, so uses very little power

If in doubt check the photographer out

OK this last bit of advice is priceless.... If in doubt see what the photographer is doing

Action shot: indicates the movement in the
video, to be honest something to be avoided in most cases... could be the objects' movement, camera
movement, or both; often used in reference to
"good TV" as opposed to static shoot,
sometimes considered as a "boring TV"...Film your own wedding baby

Film your own wedding top tip

Stay on your subject whatever or whoever you're filming... make a mental note to stay on them for at LEAST 5 seconds keeping the camera  perfectly still ...no camera movement what so ever

This is just a guide
to help you remember what you may want to film.The most
important thing is that the process is enjoyable and a lot of
fun.
The Bride's Preparations
Travel to the location where the Bride is getting ready. Film her
having her hair and make-up done, capturing any pre-wedding
nerves. If the bridesmaids are also present capture them as they
too get ready.

Film your own wedding super tip

Film loads of stuff don't worry about it being any good, just follow our instructions and keep filming let us work out what's good

Film your own wedding positioning tip

This mainly apply when indoors ...so basically if you can, when someone you want to film is  standing infront of a window on a sunny day...try not to film them so you are filming into the sunny window

this creates a silhouette of the person and make it hard to see them.

Film your own wedding shooting tip 3

The Bride’s Preparations
obviously you’re  going to be  where the Bride is getting ready. Film her
having her hair and make-up done, capturing any pre-wedding
nerves. If the bridesmaids are also present capture them as they
too get ready.this is an opportunity have some real fun. And to be honest where some of the best footage is captured.


Initially your mates maybe a little self conscious with you sticking a camcorder in their, face so start off easy. Get them arriving and being greeted, thats always a nice moment ..As the morning moves on they will become more relaxed with being filmed.

And unaware that’s its even happening …Have a laugh with them, after all that’s the whole point… they are your mates and your not a stranger …That’s what makes our videos great. So muck around play with the camcorder pass it around basically have a hoot. Get them to have a dance if music is playing. Or get them to do something that is unique to them.

It can be anything, twisting their tongue in strange way for example. …I know this might sound crazy, but believe me when I say this is what its all about, capturing the personality’s of the people that are there. And you and your friends are the best people to do that ..

lastly get people to leave a short message for the bride. If possible somewhere quite and out of the way so it a nice surprise when she watches it back…and good place to start this is with the question what do you want to say to ( brides name ) that leaves it nice and open. check out our other reviews and our other posts this was a Film your own wedding shooting tip

Film your own wedding tip 4

It's less about asking the people ypu are filming laods of inane questions  (apart from asking the bride and groom how they are feeling) and much more about  filming how peopel are interacting with each other ...thats's where the gold is...the point being you don't need to make somthing happen when you are filming, just film what actaully is happeneing thats all ypu need to do

film your own wedding zen

Film your own wedding the grooms prep

Remember these  guys are your mates, so its up to you to get them at their best.

which is too say their most relaxed and natural.

Becasue fundimantally that's what makes theses videos unique, The fact is no matter how good a professional videographer  is they will never have that one edge you've got, the people you are filming are your mates,.

don't make a big deal out of the filming process just have a laugh and before too long they will forget its even happening.

imagine the camcorder is a sleeping baby  that you don't want to wake ...make everything slow and smooth and you will be on to a winner.

Film your own wedding the smile super tip

everyone looks great when they are smiling so make them smile when you film them ... that's all you have to do :)

Film your own wedding super tip "what do I film"

Somtimes the person filming is unsure if he or she should be filming a particular moment ...the rule of thumbs is, if there is any display of emotion then film it 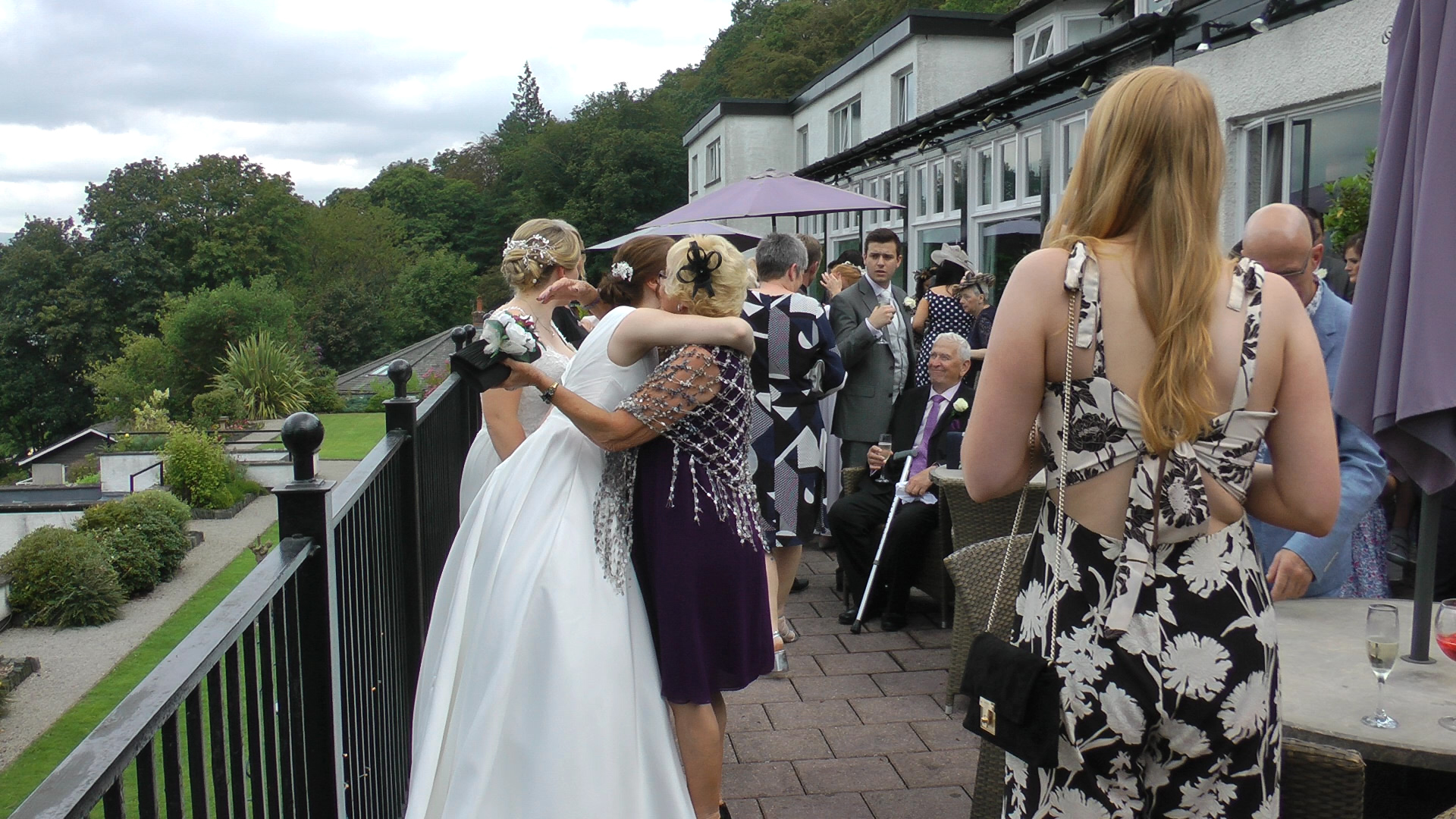 Film your own wedding super tip the party

Film your own wedding super tip the party

The end of the night shenanigans is one of the very best times to shoot you are virtually guaranteed to get some fab footage. conversely it's defiantly one of the worst time to set the camcorder on a tripod, put it in record and just leave it there for an hour, inevitably you will get an hour footage showing  peoples backs.

If you just take 15 mins at the height of the night and get in among everyone, who by now are usually very merry you will get some priceless footage the couple will love you for it  and then you are done and can enjoy the festivity's